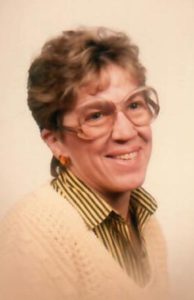 Ann Craig Ludwig 82, of Ellwood City, Pennsylvania, died January 28, 2019, in her Ellwood City home, following a brief period of failing health, surrounded by family who loved her. Her father, Harold Eugene Craig (who died in 1972), and her mother, Charlotte Ann (Holt) Craig (who died in 2006), hailed from families with a deep history in Beaver County, PA. Ann graduated from Aliquippa High School and received a BA from Penn State University.

Ann met her future husband, Joseph Manion Ludwig, while attending Penn State University. Joe had a big white Buick convertible with red bench seats. He listed on a college bulletin board his willingness to give folks a ride to Pittsburgh on a weekend at a $2.00 fee. Joe remembers Ann being one of six respondents and looking breathtaking in a white dress with a yellow flower. Ann sat in the middle of the front bench seat and ran the radio. That encounter was the beginning of a “long ride.” They were married on October 10, 1959, at Saint Titus Church in Aliquippa, and began to raise their family, create Joe’s law practice (Ludwig, Palenti, Wilson and Sullivan) in Pittsburgh and build a life together that would span sixty years.