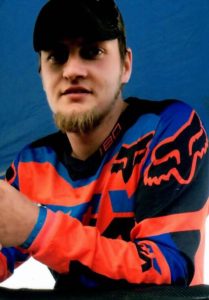 Adam J. Zilka, 26, of Conway passed away on Saturday, November 3, 2018 as the result of an automobile accident.

Adam was born on December 25, 1991 in Ellwood City to Elizabeth L. (Zilka) Jewel. He had graduated from Riverside High School with the class of 2010. Adam had worked at Matthews Wall Anchor in Beaver Falls for three years, and most recently for Pittsburgh Stage Inc. for two years. He is also a member of the Holy Redeemer Parish. Adam enjoyed racing his dirt bike, hunting, fishing, working on cars, and participating in demolition derby’s.

He is survived by his mother, Elizabeth L. (Howard B.) Jewel of Zelienople, his daughters, Sophia and Ava Zilka, his sister, Anna Zilka of Colorado Springs, CO, his girlfriend, Savannah Grossetti of Conway, his aunt’s and uncles, Bob (Jess) Zilka of Etna, WY, Mary (Larry) Brown, Carla (Karl) Zimmerman ( who are also Adams God Parents), Carl (Chris) Zilka Jr., and David Pritts all of Fombell.

He was preceded in death by his maternal grandparents, Carl and Elizabeth Zilka, Sr, and his aunts, Bonnie Zilka and Cindy Pritts.

Visitation will be held on Thursday from 2-4 and 6-8 pm at the Samuel Teolis Funeral Home Inc. and Cremation Services. A mass of Christian burial will be held on Friday at 10:00 am at the Holy Redeemer Church with Father Mark Thomas officiating. Interment will follow at the Holy Redeemer Cemetery. Those attending the funeral mass are asked to meet at the funeral home on Friday by 9:20 am.

Memorial contributions in Adam’s name may be made to his children in c/o of Bob Zilka.