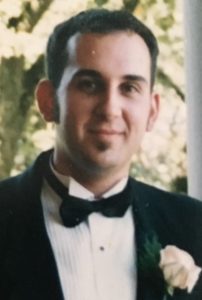 Albert M. Erka, 44, of Ellwood City passed away unexpectedly at his residence on Tuesday, February 26, 2019.

Albert was born on September 29, 1974 in Ellwood City to Mike and Oranija (Nastevska) Erka. He is a member of the Lincoln High School class of 1992, and graduated from Clarion University with a Bachelors Degree in Mathematics. Most recently he had been working for Arconic in Cranberry Twp.. He enjoyed hunting, fishing, traveling and playing golf.

He is survived by his parents, his brother, Borche (Lisa) Erka of Hampton Twp., his niece and nephews, Brendan Erka, Arianna Erka, and Matthew Erka, his aunt, Ratka Radevski, and his cousins, Roger, Andy, and Amy Radevski.

Visitation will be held on Friday from 4-7 pm at the Samuel Teolis Funeral Home, Inc. and Cremation Services and on Saturday from Noon until the time of the Service at 1:00 pm at the St. Elias Romanian Orthodox Church with Father John Schmidt officiating. Interment will follow at the Locust Grove Cemetery.