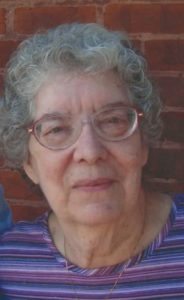 Mrs. Jinar was born on November 9th, 1933 in Sanford, North Carolina to the late Arthur and Ruby (Brown) Griffin. She had graduated from the Jonesboro High School in North Carolina. For a brief period of time she worked at Benjamin’s Pharmacy in Ellwood City. Then from 1967 until her retirement in 2011, Dena worked for the Spoa family at Christy’s Market in Franklin Twp., Value King in Ellwood City, and Save-A-Lot also in Franklin Twp.. She is a member of the St. Elia’s Romanian Orthodox Church in Ellwood City and for many years was the bookkeeper for the church. Dena is a former member of the V.F.W. Ladies Auxiliary, and had enjoyed bowling and sewing.

She was preceded in death by her parents, her husband, Benjamin Jinar whom she married on October 8th, 1950 and passed away in 1986, and her brothers, Billy, Bobby, and Lawrence Griffin.

Visitation will be held on Thursday from  5-8 pm with a Saracusta Service to be held at 7:45 pm  at the Samuel Teolis Funeral Home and Crematory Inc.. A service for Mrs. Jinar will be held on Friday at 10:00 am at the St. Elia’s Romanian Orthodox Church with Father Wayne Paul Wright officiating. Interment will follow at the Locust Grove Cemetery.