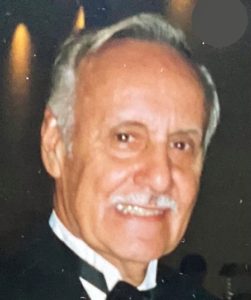 “You have delighted us long enough,” said famed English novelist, Jane Austen. After 94 years of delighting us on Earth, God decided it was time to call Fonce home to be with Him.

Alfonso Frank Angelucci, 94, passed away peacefully from our world into Heaven at 7:45am on May 17, 2021. Known as “Fonce” or “Foncie” to all who knew him well and loved him, his passing will bring some silence to bowling alleys, card games, auto body garages, family gatherings, sporting events and wedding receptions that he would attend.

Born December 28, 1926, Fonce grew up in the Rockdale region of the Ellwood City area, attending North Star Elementary School (near the WesBanco Bank today) through fifth grade during the height of the Depression era. His family then moved to Orchard Avenue on Ellwood City’s North Side where he attended North Side Elementary School and later Lincoln High School. He kept in touch with his many friends from his old North Side neighborhood for years and years. He was a proud graduate of the Lincoln High School Class of 1945 and was briefly a member of the very first varsity baseball team in school history. His high school baseball career and senior year of high school was interrupted when he was drafted into the U.S. Army to serve with the 441st Engineer Depot Co. during World War II, reaching the rank of Private First Class. For his service in the U.S. Army, he earned the Army Occupational Medal (Japan), the Asiatic-Pacific Theater Ribbon, and the World War II Victory Ribbon.

Starting at a wage of $5 per week, Fonce began working at Henry’s Garage in Ellwood City when he was 16 years old. He worked every day after school until 7pm and then all day on Saturday, cleaning and sweeping. This led to a 65+ year career as an auto body specialist and his retirement from McElwain Motors in 2011 at 84 years old. Widely known as an expert in the auto body field, he was sought after for his skill in repairing dented cars without the use of bonding agents. Fonce worked at the Babcock and Wilcox Steel Mill in Koppel, PA for 11 years while still keeping a hand in auto body, working at Bruno’s Garage in Ellwood City’s West End neighborhood on Saturdays and some evenings. He then returned to auto body work, full time, with Freeman Buick/Pontiac in the early 1980’s. Work, reliability, loyalty and commitment were always very important to Fonce.

An accomplished athlete, Fonce played baseball for many years in the County League and North County League. He also enjoyed golfing and was an avid bowler, once rolling a 298. He bowled several 700+ series in the old Civic League at Park Lanes in Ellwood City. He loved all sports and was an avid fan of the Pittsburgh Pirates, Steelers, and Penguins. As a golfer and bowler, he played even into his 90s. He also worked out at a local gym with his brother, “Bug”, right up until the pandemic put restrictions on such activities.

Fonce was a member of St. Joseph the Worker Roman Catholic Parish in New Castle. He and his wife of 68 years, Eleanor, donated funds for the brick shrine that sits outside the church today after the pair had won a raffle on a $2 ticket shortly after the church opened. He attended church faithfully with his family for many, many years.

Family was extremely important to Fonce and if he counted you as one of his numerous friends, you were a part of that family. He was exceedingly proud of the accomplishments of his children, son-in-law and daughters-in-law, grandchildren, as well as his many nieces and nephews – boasting to whomever would listen about the accolades of each. Whether it was the gang at “the garage” (McElwain’s Auto Body), the guys at the camp (his brothers, sons, and nephews), his fellow bowlers, his card-playing buddies (brothers, sons, and nephews) . . . ALL were considered family and were treated with the utmost admiration. His jokes, stories, pranks, and anecdotes humored many. His wit and charismatic personality often came through when he met someone new. He was not afraid to share an amusing tale, comment, or gag if it meant taking the seriousness out of awkward moments or social gatherings. His harmonica or jaw harp was often at the ready and he would take any song request – only to play you his rendition of “Turkey in the Straw” every time.

“Life is not important except for the impact it has on other lives,” said Jackie Robinson. So it was with Fonce, who went out of his way to make it about others – not himself. If he helped you with your car, gave you a jar of peppers or tomatoes from his garden, knitted you a scarf, assisted you with work at your house, or just simply made you laugh, then you understand how important making someone else’s day was to him. So, follow his lead. Make it about others and not yourself – and be the reason that someone smiles today.

Visitation will be Thursday, May 20 from 1-3 PM and 5-8 PM at the Samuel Teolis Funeral Home and Crematory Inc., 309 Spring Avenue, Ellwood City, PA. A mass of Christian burial will be held on Friday, May 21 at 10:00 am at the Holy Redeemer Church, Ellwood City. Entombment will follow at the Holy Redeemer Cemetery where military honors will be conducted by the Veterans Honor Guard. Due to the covid-19 Pandemic, unless vaccinated, all those attending are asked to please wear a mask or face covering and practice social distancing.