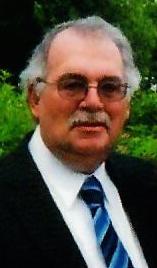 Alfred A. Bertagna, 75, of Slippery Rock Twp. passed away on Tuesday, October 3, 2017 in the Haven Convalescent Home.

Mr. Bertagna was born on May 17, 1942 in Ellwood City to the late Alfredo and Rose Strazze Bertagna. Al is a member of the Lincoln High School class of 1960, and graduated from Alliance College in 1962 with a degree in machine designing.  He also had attended classes at Youngstown State University. He worked at the Aetna Standard, Matthews Conveyor, and Herr-Voss from which he retired with over 30 years of service as a machine designer. Al was a member of the Holy Redeemer Parish and the Castle Pistol Club. He enjoyed bowling, the Pittsburgh Steelers, flower gardening, his dogs, cats, horses, and watching the wildlife in his yard.

He is survived by his wife Susan Scott Bertagna whom he married on June 14, 1969, his daughters Angela (Cha-Chi Ren) Bertagna of Elliott City, MD, and Michelle (Charles Katz-Leavy) Leavy of Falmouth, ME, his son Michael (Lindsey) Bertagna of New Castle, his grandchildren Emily Leavy, Benjamin Leavy, Liliana Bertagna, and Anthony Bertagna, and several nieces, nephews, and cousins.

He was preceded in death by his parents, his sisters Hilda Ferrigno and Iola Filauri, and his brother Delfo Bertagna.

Visitation will be held on Thursday from 6-8 pm in the Samuel Teolis Funeral Home, Inc. and Cremation Services. A mass of Christian burial will be held on Friday at 10:00 am in the Holy Redeemer Church in Ellwood City with Father Mark Thomas officiating. Interment will follow at the St. Vitus Cemetery. Those attending the funeral mass are asked to meet at the funeral home on Friday by 9:20 am.

Mr. Bertagna’s family would like to thank the Haven Convalescent Home doctors, nurses, and staff for the wonderful care that they extended to him.

Memorial contributions in Al’s name may be made to the charity of the donors choosing.