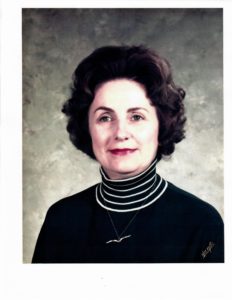 Growing up during the great depression, Alice was born on July 16, 1923. She attended a one room school house at the top of Mount Hope road and Dutch Ridge road where she excelled in her class work.

During World War II, she assisted in the war effort by working at United States Steel Tube Mill in Ellwood City. After the War, she worked at places such as Isaly’s Ice Cream store, Precision Metal Products in Ellport, and Troggios Restaurant in New Castle. She retired from the State of Pennsylvania Youth Development Center in New Castle.

Alice enjoyed gardening, cooking, and interior decorating. She was an excellent cook and certified interior decorator. Her home was constantly changing by adding additions and rearranging furniture and flower beds. She was an avid reader and loved classical music. She had deep belief in God and practiced the word of the Bible in her daily life.

She is survived by her two sons Gerald  (Linda) Cole and Joseph (Dongmei) Knechtel both of Ellwood City, her daughter-in-law Donna Cole of North Sewickley Twp., two granddaughters, five grandsons, and her great grandchildren. She is also survived by her two sisters Rosalie Woodhall and Margie Davies, and beloved nieces, nephews, and grandnieces and grandnephews.

Besides her parents, she was preceded in death by her late husband Colonel Nathan Woodfield, two sisters, Blanche Wiley and Gloria Burgess, her son Larry Cole, and her grandson Cary Cole.

As per Alice’s wishes there will not be a public visitation or service. The funeral arrangements are entrusted to the Samuel Teolis Funeral Home, Inc. and Cremation Services. Interment will be at the Harmony Baptist Cemetery.

Memorial contributions in Mrs. Woodfield’s name may be made to the Thomas E. Starzi Transplantation Institute UPMC, or to the charity of the donors choosing.