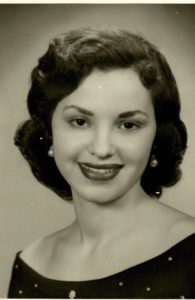 Mrs. Amalia A. Pecoraro, 85, of Ellwood City passed away on Sunday, October, 6, 2019 at the Quality Life Services in New Castle.

Mrs. Pecoraro was born on January 13, 1934 in New Castle to the late Arduino and Luisa (Lamucca) Parente. She had graduated from Lincoln High School with the class of 1951. Amalia had worked at Edmin and Keller’s Department Stores in Ellwood City as a sales person, and later at Macy’s and Saks Fifth Avenue in Pittsburgh in the cosmetic department. She is a member of the Holy Redeemer Parish and the Christian Mothers of the Holy Redeemer Parish. Formerly she was a CCD teacher, and member of the Corona D’Italia. She enjoyed cooking, baking (especially cookies), playing the piano, and sewing.

She was preceded in death by her parents, her husband, Elio Pecoraro whom she married on October 29, 1955 and passed away on January 14, 2012, her son-in-law, Frank Santamaria, her sisters, Alfonzina Zona, Margherita Nocera, Esterina Santagata, and Emma Court, and her brother, Victor Parente.

Memorial contributions in Mrs. Pecoraro’s name may be made to the Holy Redeemer Angel Fund or to the Ellwood City Area Public Library.