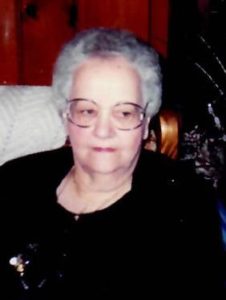 Mrs. Lackey was born on June 20, 1918 in Ellwood City to the late George and Lula (DePaul) Bevivino. She had attended Lincoln High School. Over the years Angie worked at J.C. Penney’s, Mario’s Market, Jake’s Market, and Murphy’s 5 & 10. She also enjoyed playing cards.

She was preceded in death by her parents, her husband, Clyde J. Lackey whom she married on November 30, 1946 and passed away on November 8, 2005, and her brother, Joseph Bevivino.

A private memorial service will be held for Angie’s family at the Samuel Teolis Funeral Home, Inc. and Cremation Services with Father Mark Thomas officiating. Interment will be at the Locust Grove Cemetery.