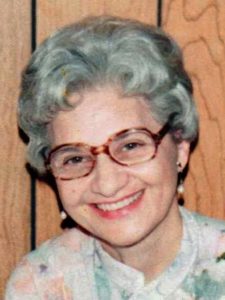 Mrs. Butchelli was born on April 13, 1923 in Ellwood City to the late Gesualdo and Josephine (Buona) Pirrera.  Anna is a member of the Lincoln High School class of 1941. She had worked at the U.S. Steel Tube Mill in Ellwood City during World War II. After the war, Anna worked at Loccisano’s as a sales clerk. She later worked at the Ellwood City Knitting Mill as a seamstress. From 1969 to 1996, Anna served on the Wayne Twp. election board, and from 1998 to 2012 she was the majority inspector of the Third Ward in Ellwood City at the Trinity Lutheran Church. She is a member of the Holy Redeemer Parish and its Christian Mothers organization, the Corona D’Italia Lodge #807 of which she is also a former Vice-President,  the Women of the MOOSE #93, and the Lioness Club. She was a long time volunteer at the Holy Redeemer Church Annual Bazaar, and at the Ellwood City Hospital snack shop. Anna enjoyed doing crafts, reading, and watching the Pittsburgh Pirates and Steelers. Most of all  she enjoyed spending time with her family especially her grandchildren and great-grandchildren.

She was preceded in death by her parents, her husband, Patsy Butchelli whom she married on November 27, 1954 and passed away on October 12, 1984, her sisters, Pauline Fanto, Rose Pirrera,  Katherine “Katie” Pirrera, and Lucy Koah, and her brothers, Anthony, Angelo, and Mario Pirrera.