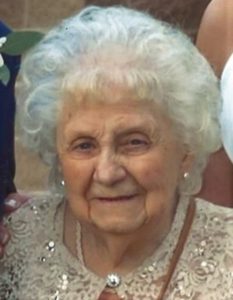 Mrs. Anna Mae Mazzanti, 89, of Ellwood City, formerly of North Sewickley Twp., passed away on Thursday, May 19th, 2022 at the Haven Convalescent Home in New Castle.

Mrs. Mazzanti was born in Beaver Falls on January 24th, 1933 to the late Joseph and Pearl (Schutte) Baumgartner. Anna Mae was a home maker and a very active Charter member of the Independent Methodist Church in New Castle. For the past few years, she had resided at Schill Manor in Ellwood City where she had many friends. She enjoyed listening to Elvis Presley music and horses.

She was preceded in death by her parents, her husband of 57 years Carmen “Carlo” Mazzanti in 2010, sisters, Minnie, Margaret, Jinny Belle, and Mabel, and brothers, Joseph and Louis.

Visitation will be held on Sunday from 2-4 and 6-8 pm and again on Monday from 10:00 am until the time of the service at 11:00 am at the Samuel Teolis Funeral Home and Crematory Inc.. Rev. Frederick Gilbert will officiate the service. Interment will follow at the Grandview Cemetery in Beaver Falls.

Memorial contributions in Mrs. Mazzanti’s name may be made to the Independent Methodist Church, 1921 New Butler Rd., New Castle, Pa 16101.