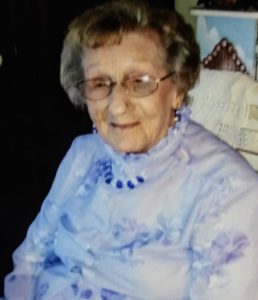 Mrs. Robinson was born on August 22, 1918 in Ellwood City to the late John and Bernice (Dubiel) Lawrence. She had lived in California for 15 years and then moved to Colorado for 22 years. She had worked in various department stores and hospital cafeterias. In 2009 Anna moved to Boardman, Ohio. Anna enjoyed gardening, needlepoint, crocheting, and crafting.

She was preceded in death by her parents, her husband, Edward Robinson whom she married in 1945 and passed away in 1985, her daughter, Patricia Ann Robinson in 2010, her sisters, Bernice Mikosz, Helen Ceasar, and Josephine Conner Jameson, and her brothers, Joseph, John, Steve, and Frank Lawrence.

Visitation will be held on Wednesday from 6-8 pm and on Thursday from 9:00 am until the time of the Blessing Service at 10:00 am at the Samuel Teolis Funeral Home, Inc. and Cremation Services with Father Mark Thomas officiating. Interment will follow at the Locust Grove Cemetery.

Memorial contributions in Mrs. Robinson’s name may be made to the St. Mary’s Alzheimer’s Center, 1899 W. Garfield Rd., Columbiana, OH  44408.