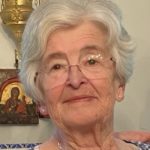 Matushka Anne “Anya” Hopko, née Schmemann, for the last two decades of Ellwood City, Pennsylvania, and previously, for many years, of Crestwood (Yonkers), New York, fell asleep in the Lord on Thursday afternoon, August 4, 2022. She was 78 years old.

At the time of her repose in the Lord, Matushka Anne was in care in a hospital in L’Annonciation (Rivière-Rouge), Quebec. She had suffered a sudden stroke on Wednesday, August 3, while with family members together on summer holiday in Lac Labelle, Quebec.

Matushka Anne was the beloved wife of the late Protopresbyter Thomas Hopko (+2015). She is survived by numerous and much beloved direct descendants.

Matushka Anne and Protopresbyter Thomas were the parents of five children: Archpriest John Hopko (Macrina), Juliana Thetford (Gregory), Catherine Mandell (Raymond), Mary Solak (Archpriest Nicholas), and Alexandra Sedor (Joseph). She was blessed with sixteen grandchildren and twelve great-grandchildren. Matushka Anne is also survived by her brother Serge Schmemann (Mary) and her sister Matushka Mary “Masha” Tkachuk (the late Archpriest John, +2021). Additionally she is survived by her children’s and grandchildren’s thirteen spouses, for whom she was deeply grateful. Family was at the center of Matushka Anne’s life. She was a beloved grandmother, sister, aunt, and cousin to a large extended family.

Matushka Anne was born on January 10, 1944, in Clamart, France, a suburb of Paris, the oldest child of the late Protopresbyter Alexander Schmemann (+1983) and his wife, the late Matushka Juliana (Ossorguine) Schmemann (+2017). In 1951 Anne and her family moved to New York City. Matushka Anne always remembered her sadness at leaving behind family and friends, and had a lifelong affection for the city of Paris.

The family settled in the upper west side of Manhattan. Although Russian was her native language, young Anne quickly mastered English. She was a good student and known for commitment to her family. After graduating from The Chapin School in 1962, she spent a year in France with her grandmother, becoming fluent in French.

Thomas and Anne Hopko were married on June 9, 1963, just after his graduation from Saint Vladimir’s Orthodox Theological Seminary, having met some years earlier. In August 1963, Thomas was ordained to the priesthood and began his nearly 52 years of ministry.

Matushka Anne had her own contributions to Church life in addition to supporting Protopresbyter Thomas. Blessed with a lovely Church singing voice, and having benefited from musical training, Matushka Anne enjoyed singing in and directing Church choirs, which often included family members.

Matushka Anne was an accomplished and talented seamstress. She not only tailored clothing for her children and many others, including lovely wedding dresses, she also made beautiful items for use in Church, such as vestments, decorative hangings and covers, and baptismal garments. A testament to the quality of these items is how many of them have been handed down, from generation to generation.

Matushka Anne also worked at Saint Vladimir’s Seminary. While part of the Seminary community, she served as a mentor to many students, offering motherly guidance and support.

Matushka Anne’s family wishes to thank Mother Christophora and the Sisterhood of the Monastery of the Transfiguration, Ellwood City, PA, who always welcomed their neighbor and friend Matushka Anne and made her feel comfortable and at home in their midst.

Matushka Anne’s family also wishes to thank all those who cared for her from the moment of her initial medical crisis to the time of her repose: the medically trained family members who immediately provided vigorous first response, the ambulance crew, the health care providers and staff at the hospital in Rivière-Rouge, and, finally, everyone who prayed with and for her. Particular thanks are offered to Archpriest Alexis Vinogradov, to sister Masha Tkachuk, and to niece Vera Tkachuk, who all lovingly ministered to Matushka Anne in her final hours.

In lieu of flowers, memorial gifts may be made to the Orthodox Church in America’s (OCA’s) Department of Liturgical Music, PO Box 675, Syosset, NY 11791-0675, to support the OCA’s initiatives to train choir directors. Donations can also be made via the online portal Donate to the OCA located on the OCA website. When donating, please designate your gift to the OCA Department of Liturgical Music as being in memory of Matushka Anne Hopko to support the training of choir directors.

The Funeral Arrangements for the Newly Departed Matushka +Anne Hopko are:

All events are taking place at The Monastery of the Transfiguration, 321 Monastery Ln, Ellwood City, PA 16117. Weather permitting, all services will take place in the large outdoor, covered pavilion Church at the Monastery. The services from the pavilion Church will be live-streamed (https://www.orthodoxmonasteryellwoodcity.org/chapel).

All clergy attending the Funeral Vigil are invited to con-celebrate. They are asked to bring white/bright vestments: phelonion, epitrachelion, and cuffs for priests, and full vestments for deacons, subdeacons, and altar servers.

The Divine Liturgy on the day of burial will be presided over by His Beatitude Metropolitan TIKHON (or his designee). The Divine Liturgy will be con-celebrated by a limited number of priests, deacons, subdeacons, and altar servers, specifically assigned and blessed to do so by His Beatitude. Other clergy attending and praying at the Divine Liturgy are asked to bring white/bright vestments in order to participate in Holy Communion and in the Procession to the Monastery Cemetery.

Here are the dates and times of the funeral services and events:

With the gratitude of the Hopko Family, The Samuel Teolis Funeral Home and Crematory Inc., Ellwood City, PA, is entrusted with the funeral arrangements.