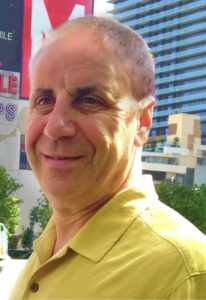 Life in Heaven as we perceive it here on Earth just got a bit more hectic.  At this moment, angels are scurrying to make sure there is always availability in the box seats and not in some remote section. They must make sure that no one is sitting on his favorite barstool, and that the remote control is his alone to rotate through every available sports channel there is. And please….there must be peanuts. Make sure there are peanuts.

Anthony Daniel “Dooney” Pietrcollo, 65, passed from this world into Heaven at 8:30 am Sunday morning (obviously to be first in line at the Gate), succumbing to a battle with cancer. He was presented to each of us as Dooney because his grandmother struggled in her native Italian with the name “Anthony,” and it always came out as “And-Dooney.”

More than simply active, there existed a passion and an occasional obsession in every facet of Dooney’s life. He was devoted to his running regimen to the point that he often had his first mile recorded before the sun rose. And if you came upon him during his run, he was always glad to speak to you while you endured his incessant running in place.

To his eighth graders, he shared an impeccable attention to detail, whether in encouraging his students to improve their writing skills, or always holding in his hip pocket that nugget of information about a literature selection that would encourage his students to read more. He also served in administration at the Ellwood City Area, Pine-Richland and North Allegheny School Districts. In addition to his teaching career in town and working as the Ellwood City Area School District Athletic Director, he was a longtime fixture of involvement in other Ellwood City organizations as well. First and foremost, Dooney was a member of Holy Redeemer Roman Catholic Church and served as a lector there for many years. He is a past member of the Ellwood City Jaycees, where he served as president in 1982-83 and was awarded Young Person of the Year in 1984.  He was a member of the Sons of Italy Lodge 608 and the Ellwood City Wolves Club, and served as secretary for the National Wolves Club for three years. He was involved with Ellwood City Amateur Baseball, coached Ellwood City Little League baseball, and Ellwood City Junior and Senior High basketball.

But his true love was football. No matter the vantage point….it was football.  It wasn’t just a job to coach at Ellwood City, Geneva College, Seneca Valley and North Allegheny. Rather, it was an apartment wallpapered with designed football plays for experimentation. In 1990, Dooney was an assistant coach as part of North Allegheny’s State Championship football team.   In 1998 he served as offensive coordinator for the Seneca Valley high school team. He studied the strategies and tendencies of all positions on the football field which made his talents so coveted.  And even if he was traveling on the other side of the country, he would always make sure there was a flight home in time for a Sunday morning coaches’ meeting.

He followed everything football on social media, incorporated himself part-time with a sports-related drug-testing job, and prided himself on knowing the up-to-the-minute news of his beloved Pittsburgh Steelers. Dooney enjoyed many a trip around the country for any type of sporting event, most often with a circle of close friends, but not thinking twice about leaving the Thanksgiving Day table and embarking alone on a trip. And while he never had a true bucket list of stadiums he wanted to visit, there was a pride in how rapidly he could recite all that he had conquered.

And through it all, he was always noted for being “first.” He was always the first to arrive at school each morning, greeting faculty and students alike as they arrived through the Commons Area doors. He was the first to submit his grades, and the first to wrap-up the end of the school year duties. He was the absolute first in any buffet line and then, of course, the first to finish eating. And his poor students did their best to keep up with his long strides as his class was the first out of the building during a fire drill, often times before the alarm stopped blaring.

But those “firsts” also transcended into his strong Catholic faith. Before finalizing any trip around the country or any weekend plans at home, Dooney always first made sure that he was able to attend a Sunday Mass wherever he was. He never missed. And true, he did not always wait for the usher to tell him when it was time to proceed to communion. He was first, or close to it. And the first thing that Dooney put in his pocket each morning, ahead of wallet or phone or keys was always a rosary. Everyone, family and friends,   can now lean on his faith, that ardent outward expression of his that was the assurance and surety of God and his calling to a better place.

Because of the restrictions due to the corona virus, a private ceremony will be conducted at the Samuel Teolis Funeral Home and Crematory Inc. in Ellwood City. Dooney will be entombed at the Holy Redeemer Cemetery, Holy Redeemer Mausoleum. Once restrictions are lifted, a Celebration of Life will be planned for all to attend at a later date.   In lieu of flowers, the family is requesting that donations be made to Club Hope, a local non-profit that provides encouragement, hope and services to families affected by a cancer diagnosis or to the high school football boosters in either the Ellwood City Area or North Allegheny school districts.

Dooney’s geographical reach was far and wide. It lived large in Ellwood City, first with family, but also in the halls of Lincoln High School and with a band of brothers at the Sons of Italy and everyone else who just knew him in town. And practically everyone did know him. It extended into coaching and coaching clinics and to ticket agents, dealers and even scalpers around the country. And his phone routinely buzzed a text from those he now knew in Italy, thanks to his brother. Despite the sheer fun that was Dooney, he also instilled purpose.

One message from a former student now enjoying a successful career, that reached Dooney’s phone early in his struggles, stated, “Every once in a while I think back to my days in Ellwood City as a kid. They were some of the happiest days of my life. Playing hoops in Ewing Park, playing for you in junior high, eating Johnny’s or Vinny’s Pizza. What really made Ellwood City so special for me were the people like you! A great person, teacher, coach and competitor.”

Dooney may have physically left us. But he left his name for us to enjoy. Actually he left the name for us to celebrate. And for all of those tangents of Dooney’s life extending everywhere, everyone experienced Dooney the same way. He never changed. And though our individual memories may revolve around specific stories and situations, the name “Dooney” cannot be said without a smile or even a hearty laugh coming to mind. And it is one and the same smile for all of us because our memories are as singular and unique as his name.