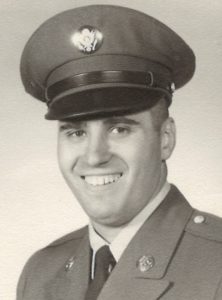 Mr. DeLoia was born in Ellwood City on March 15th, 1941 to the late Antonio and Julia (Fagnelli) DeLoia. He graduated from Lincoln High School with the class of 1965. He enlisted into the U.S. Army on November 12th, 1963 until his discharge on November 10th, 1965 with the Rank of SP-4,  and was awarded the AFEM Good Conduct Medal. Mr. Deloia worked at the B & W plant as a machine operator for 20 years and then as a foreman for 17 years, Rockwell Industries, PMAC in Beaver Falls, and at Safety Appliance In Ellwood City, where he retired from in 2013. Mr. DeLoia is a member of the Holy Redeemer Church, and was a devoted grandfather who loved spending time with his grandson, Jacob.

He was preceded in death by his parents, his sister, Josephine DeLoia, and his brothers, Paul and Michael DeLoia.

As per Mr. DeLoia’s wishes, there will be no visitation or service. Memorial Contributions in Mr. DeLoia’s name may be made to the Holy Redeemer Angel Fund. Final arrangements are entrusted to the Samuel Teolis Funeral Home & Crematory Inc..