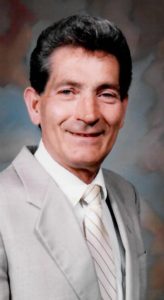 Mr. Rossi was born on November 13, 1933 in Ellwood City to the late James and Philomena (DeMauro) Rossi. Anthony had graduated from Lincoln High School with the class of 1952. He enlisted with the U.S. Army on June 19, 1956 and served with the H/H Company 7th Infantry Division until his discharge on May 31, 1962, and was awarded the Good Conduct Medal. Following his enlistment with the Army, Anthony worked at the Lawrence Savings & Trust in Ellwood City as the Head Teller, then in the generals sales department at the Babcock and Wilcox Steel Mill in Beaver Falls for over 28 years. He later worked at the Kaufmann’s Department Store at the Beaver Valley Mall, and Giant Eagle at the Franklin Twp. Plaza. He is a member of the Holy Redeemer parish, and a past member of the Holy Redeemer Holy Name Society and Special Activities Group. He was also a long time volunteer for the Holy Redeemer Annual Bazaar. Anthony enjoyed gardening and working crossword puzzles.

Mr. Rossi is survived by his wife, Rose Marie (Marazzi) Rossi whom he married on September 17, 1960, his sons, Mark Rossi of Cranberry Twp. and Michael Rossi of Ellwood City, his grandchildren, Carli, Emily, and Allie Rossi, his sister, Theresa (Dr. John) DeCaro of Ellwood City, and his brother, John (Madelyn) Rossi of New Castle.

He was preceded in death by his parents, his daughter, Jennifer M. Rossi, his sisters, Mary Russo, Carolyn Lonnett, Agnes Consentino, and Rose Fusetti. and his brothers, Peter, Paul, Dominick Rossi, and one brother in infancy.

Visitation will be held on Sunday from 2-4 and 6-8 pm at the Samuel Teolis Funeral Home Inc. and Cremation Services. A mass of Christian burial will be held on Monday at 10:00 am at the Holy Redeemer Church with Father Mark Thomas officiating. Interment will follow at the Holy Redeemer Cemetery. Those attending the funeral mass are asked to meet at the funeral home on Monday by 9:20 am. Members of the Veterans Honor Guard are asked to meet at the cemetery by 10:50 am to conduct full military rites.

Memorial contributions in Mr. Rossi’s name may be ,made to the Holy Redeemer Angel Fund or to the Ellwood City Area Public Library.