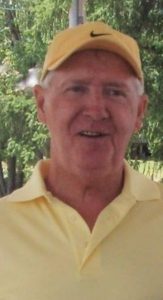 B.Wayne Jacobs, Sr., 80, of Wayne Township passed away on Tuesday, January 5, 2021 in the emergency department at UPMC Jameson Hospital.

Mr. Jacobs was born on a Friday, October 4, 1940 in Jefferson County, Ohio and often teased all the best people were born in October. Mr. Jacobs was the second eldest son of the late Joseph and Yetta (Baker) Jacobs and grew up with eight brothers and three sisters. Mr Jacobs worked as a welder at the Ellwood City Iron and Wire Co. and later as a roofer with Paul Boots and Sons. Having such a large family Mr. Jacobs was both competitive and  jovial enjoying many activities from softball, horseshoes, cornhole and bowling to things he was passionate about such as hunting, golf, billiards, the Pittsburgh Steelers and most of all his loving family.

He was preceded in death by his parents, a son, B. Wayne Jacobs Jr., a sister Edna Schidemantle, brothers Paul, Dennis and Jeffrey.

Mr Jacobs lived 29,313 days and he filled them all with love and laughter.

Friends and family will be received on Monday from 4:00 pm until the time of the service at 7:00 pm at the Samuel Teolis Funeral Home and Crematory Inc. with Rev. Dennis Arndt officiating. Those attending are asked to wear a mask and practice social distancing.