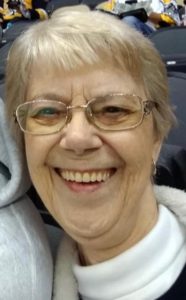 Barbara was born on March 29, 1946 in Ellwood City to the late Charles and Betty (Senior) Kreigisch. She had graduated from Riverside High School with the class of 1964. For many years she worked at the Giant Eagle distribution center in Washington, Pa as a stocker. She was an avid sports fan. Her greatest joy was spending time with her grandchildren and great-grandchildren.

She is survived by her daughters, Terri Neeley of Monaca and Heather Fink of Oklahoma, her son, Bruce (Michelle) Harter of New Castle, her grandchildren, Autumn, Haley, Erica, and Brianna, her four great-grandchildren, and her sister, Cheryl Ansbach of South Carolina.

She was preceded in death by her parents, her granddaughter, Ashley, and her sister, Deborah E. Gillespie.

Family and friends will be received on Thursday from 2:00 pm until the time of the memorial service at 4:00 pm at the Samuel Teolis Funeral Home and Crematory Inc.. with Rev. R. Tod Custer officiating.