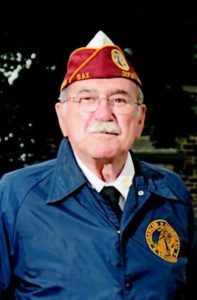 Mr. Castellani was born on October 25, 1930 in Ellwood City to the late Leandro and Maria (Ceccarli) Castellani. He graduated from Lincoln High School with the class of 1949, and is a member of the Holy Redeemer Parish. Carl worked at the U.S. Steel Mill in Ellwood City before enlisting with the U.S. Army on April 11, 1951. He served with the 187th Airborne Regimental Combat Team (ARCT) of the 101st Airborne Division of the Army, called the Rakkasans. A paratrooper, he was awarded the Korean Service Medal, United Nations Service Medal, Good Conduct Medal, and the National Defense Service Medal. He was discharged from service on June 8, 1955. He then became active in a number of veterans groups and causes including; Service Officer for Ellwood City American Legion Post 157, Commander of Lawrence County DAV Chapter 112, Commander of New Galilee VFW Post 8106, serving on the Beaver/Lawrence County Veterans Honor Guard since 1989 for over 1000 funerals, and Veterans Liaison officer with six congressmen and senators, working to protect the rights of veterans. He also was a member of the VFW Post 252, MOOSE Lodge #93, Eagles Club, Sons of Italy #608,  and volunteered at the VA Butler Healthcare with over 12,000 hours of time given.

He was hired in 1957 by the U.S. Postal Service as a postal carrier and liaison officer for congressmen in the 25th, which became the 4th, district for the postal department from 1958 to 1992. He retired from the postal service on October 2, 1992. For many years he served as the coordinator for the Memorial Day Parade and the Veterans Day program at Lincoln High School. In his younger days he played softball in the Ellwood City men’s league, and for 20 years was a manager and coach for the Wur-Ell-Wayne baseball league.

He is survived by his daughter, Tamre (Robert) Joyce of Stroudsburgh, PA, and his grandchildren, Daniel (Kelly) Joyce, Elizabeth Joyce and her fiancé Bryan Elman, and Veronica Joyce.

He was preceded in death by his parents, his wife, Lydia (Joseph) Castellani whom he married on August 11, 1956 and passed away on January 25, 2009, his sister, Yolanda DeNome, and his brother, Sam Castellani, Sr..

Visitation will be held on Thursday from 4-7 pm at the Samuel Teolis Funeral Home and Crematory Inc.. A mass of Christian burial will be held on Friday at 10:00 am at the Holy Redeemer Church with Father Mark Thomas officiating. Members of the Veterans Honor Guard are asked to meet at the church on Friday by 10:50 am to conduct full military honors. Interment will be at the National Cemetery of the Alleghenies.