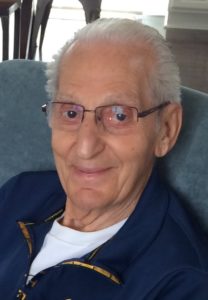 Heaven just received “THE FINEST” soul…Carmen Joseph “Nooch” Marcello, age 90, formerly of Ellwood City, PA, passed away on April 7, 2018, while under the care of Ames Family Hospice of the Western Reserve in Westlake, OH. After 21 years, he was reunited with the love of his life, the late Mary Jane (nee Mathas) Marcello, whom he married on May 2, 1953, and passed away on March 18, 1997.

He was the best father to his surviving daughters, Jonette (Larry) Capra of Cranberry Twp., and Ricka (Alex) Jelepis of Westlake, OH; doting grandfather to Courtney (Eric) Cassat of Cranberry Twp., Chelsey (Christopher) O’Connell of Pine Twp., and Ava Jelepis of Westlake, OH; special “GG” to Vincent Cassat and Carmen O’Connell of Pine Twp., and two great-grandbabies soon to arrive. He is also survived by his sister-in-law, Michelle Mathas of Ivyland, PA

Carmen was preceded in death by his parents, Vincent and Philomena “Nellie” (nee Venezie) Marcello; his in-laws, John and Ricka Mathas; his sister, Rachel (Thomas) Colao and brothers, Pat (Terry) and William Marcello and one in infancy, his sister and brother-in-law, Lillian Barbati and John Mathas.

Carmen was born on May 24, 1927, in Ellwood City, PA. At the age of 17, he enlisted in the U.S. Navy Reserves. Proud to be Seaman First Class, he served on the dry docks of the USS ABSD-1 in the Leyte Gulf, Philippines. Upon his discharge, he received a Pacific and American Theatre Ribbon and Victory Ribbon.

Shortly after returning to the states, he studied at NYC and Pittsburgh Schools of Tailoring and was employed at Dom Perry Tailors in Youngtown, OH. Following his tailoring days and for the next 34 years, Carmen worked for Babcock & Wilcox ending his career there as a production/planner scheduler, a job he truly enjoyed and at which he made lifelong friends. And, Throughout these years, he always had a love of jazz music, and therefore, his passion of playing the drums was evident. He was a member of the band, the Keystones, in the 50’s and 60’s. His greatest joy, besides his family, was playing the drums at his daughter’s and granddaughter’s wedding, and his final performance was at his 90th birthday party, where he proved that he “still had it.” For many years, Carmen could be found standing in the kitchen of Ricka’s Restaurant cooking the perfect pizza or at Ellwood City basketball games. He was also employed at McElwain’s Details. For many years, he enjoyed woodworking, and was happiest when he could give a relative or friend on of his creations. In later years, he enjoyed the company of the “AMEN” Club, his favorite guys.

Family and Friends are welcome to say their goodbyes on Wednesday from 6-8 pm and on Thursday from 3-7 pm at Samuel Teolis Funeral Home, Inc. and Cremation Services, 309 Spring Ave., Ellwood City, Pa 16117. A mass of Christian burial will be said by the Rev. FR. Mark Thomas on Friday at 11:00 am at the Holy Redeemer Church, 415 Fourth St., Ellwood City. Members of the Holy Redeemer Holy Name Society are asked to meet at the funeral home on Thursday by 6:40 pm to conduct a service at 6:45 pm.

He will be laid to rest next to his beautiful wife at Locust Grove Cemetery. Members of the Veterans Honor Guard are asked to meet at the cemetery on Friday by noon to conduct full military rites.

In lieu of flowers, the family asks that donations be made to the HOPE for Autism Foundation in Wexford, PA, by calling 724-933-HOPE.