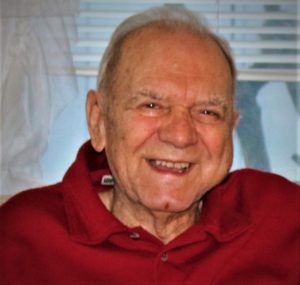 Mr. Casper W. DeFilippo, 97,  of Ellwood City passed away on Thursday, December 31, 2020 at the Good Samaritan Hospice in Beaver.

Born December 23, 1923 in Ellwood City a son of the late John and Mary (Montango) DeFilippo. He was a 1941 graduate of Lincoln High School. He enlisted with the U.S. Army on May 27, 1943  and served with the 9th Field Artillery Battalion Battery B until his discharge on November 25, 1945 with the rank of Technician 5th Grade. He had fought in the battles of Rome-Arno, Southern France, Rhineland, and Central Europe. He was awarded the Good Conduct Medal, European African Middle Eastern Campaign Medal with 4 Bronze Stars, and the World War II Victory Medal. Following his service he worked at the 5 & 10 Store and the U.S. Steel Mill for 33 retiring in 1975. He also had worked at the Ellwood City Library for 20 years as a custodian. He was a member of the Holy Redeemer parish, and the V.F.W. Post 252. He enjoyed his family, fishing, wine making, sports, gardening, taking care of his home, and his 3 cats especially P.J. his constant companion.

Casper is survived by his wife, Amy (Slavic) DeFilippo whom he married on March 6, 1943, his daughter and son-in-law, Donna (Robert) Whitlach of Black Mountain, NC, his son, John DeFillippo of Ellwood City and John’s dear friend Jacqueline Ferrell of Allison Park.

He was preceded in death by his parents, his sisters, Viola Arkwright and Ann Conti, and his brother, John DeFilippo.

As per Casper’s wishes there will not be a public service. The funeral arrangements are entrusted to the Samuel Teolis Funeral Home and Crematory Inc..

Memorial contributions in Mr. DeFilippo’s name may be made to the Holy Redeemer Angel Fund or to the Ellwood City Library.