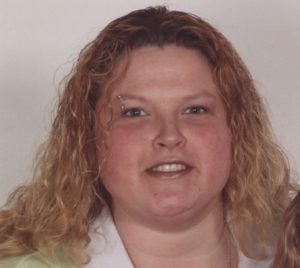 Claudia Marie (Stoyanoff) Perell, 46, of Ellwood City passed away unexpectedly on Tuesday, January 4, 2022 at her residence. She was born on October 18th, 1975 in New Castle to Jeff and Helen Clydene (Hoffman) Stoyanoff of North Sewickley Twp..

Claudia was a 1994 graduate of Riverside High School. In her earlier years she worked at Romar Textile. Claudia’s greatest joy in life were her grandchildren. She had a true knack for plants and would help others in need.

In addition to her parents she is survived by her daughter Stormie Perell of Ellwood City, grandchildren Bentley and Wyatt Cox of Ellwood City, brother Jason (Crystal) Stoyanoff of West Mayfield, paternal grandmother Octavia Stoyanoff of Ellport, nephew Jake Stoyanoff , aunt Eileen McKelvey, uncles James R. and William Stoyanoff, sister-in-law Season (Mike) Liller of North Huntington, and several cousins. Claudia will be deeply missed by all who knew and loved her.

A Celebration of Claudia’s life will be held on Saturday, January 15th from 3-6 PM at the Lillyville Church of God. Final arrangements are entrusted to the Samuel Teolis Funeral Home and Crematory Inc..

The family asks that donations be made out to her daughter, Stormi Perell, 817 Crescent Avenue Rear, Ellwood City, PA 16117.