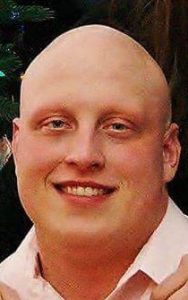 Colby was born on June 27, 1983 at Fort Hood, Texas to Malea Cochran of Portersville. He had graduated from Seneca Valley High School with the class of 2001 and later from the New Castle School of Trades earning a certificate in HVAC. He had been working at Costco in Cranberry Twp. for 11 years as a meat cutter. Colby enjoyed hunting, fishing, weight lifting, and most of all he loved his daughter Aida.

He is survived by his mother, Malea Cochran of Portersville, his wife, Jordan (Sawtelle) Tooker, his daughter, Aida Tooker, and his dog, Otto.

He was preceded in death by his maternal grandparents, Burt and Mary Cochran.

Family and friends will be received on Friday from 5:00 pm until the Celebration of Life Service at 7:00 pm at the Samuel Teolis Funeral Home and Crematory Inc.