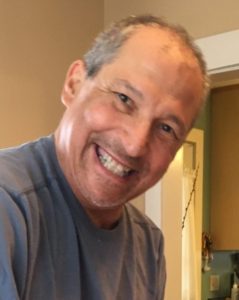 Danny was born in Ellwood City on March 26, 1959 to Anthony F. and Grace (Cerritelli) DeCaria. He had graduated from Lincoln High School with the class of 1978, and later from the Pittsburgh Beauty Academy. For 18 years he was the owner and operator of DeCaria’s Hairstyling in Cranberry Twp.. Most recently he has been working alongside his brother David at DeCaria’s on 5th as a hairdresser. He was a faithful member of the Holy Redeemer Parish. An avid Steeler’s fan, Danny was a long time member of the Black and Gold Brigade. A wine enthusiast, he enjoyed cooking, DIY projects, and traveling especially the trips he took to Italy with his family members. Danny will be remembered for living life to the fullest.

He is survived by his mother, Grace DeCaria of Ellwood City, his partner, Michelle “Shelley” Mathew of Zelienople, his son, Michael Harris of Maryville, TN, his sisters, Denise Sturkie, Diana DeCaria, Debra Mann all three of South Carolina, Donna (Michael) Morini of Ohio, his brother, David (Donna) DeCaria of Ellwood City, and many nieces, nephews, great nieces, and great nephews.

He was preceded in death by his father, Anthony DeCaria, and his brothers-in-law, Tim Mann and Sonny Sturkie.

Family and friends will be received on Wednesday from 1:00 pm until the time of the mass of Christian burial at 2:00 pm at the Holy Redeemer Church with Father Mark Thomas officiating. Interment will follow at the Holy Redeemer Cemetery. Those attending are asked to wear a mask and practice social distancing.

Memorial contributions in Danny’s name may be made to the Holy Redeemer Angel Fund, or to the Ladies of Charity.

The Samuel Teolis Funeral Home and Crematory Inc. are entrusted with the funeral arrangements.