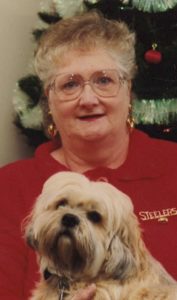 Mrs. Darlene R. Burton, 84, of Ohioville passed away on Friday, February 4th, 2022 at the Concordia at Villa St. Joseph in Baden.

Mrs. Burton was born on September 19th, 1937 in Jackson Center, Mercer County to the late Nelson and Emmy (Faulconbridge) McAnallen. She had graduated from Lincoln High School with the class of 1955. For many years, Darlene worked as the Tax Collector for Ohioville, Pa, and was the co-owner/operator of John’s Lawn and Garden along with her husband John. A person that enjoyed watching sports, Darlene was as avid of a Pittsburgh Steeler’s fan that there ever was along with being a fan of the Pittsburgh Penguins and Pirates. She also loved her annual trip to Disney World with her sister Dotty.

She was preceded in death by her parents, Her husband, John Burton, sister and brother-in-law, Dorothy “Dotty” and Frank J. Wallace Jr., and nephew, Nelson D. Wallace.

Visitation will be held on Tuesday from 3 pm until the time of the service at 7 pm at the Samuel Teolis Funeral Home and Crematory Inc. with Rev. Dennis Arndt officiating. Interment will be at the Highland Cemetery in Ohioville, Pa.

Memorial contributions in Darlene’s name may be made to the Beaver County Humane Society.