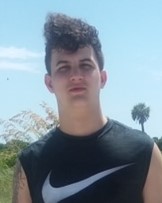 Darren was born on July 5, 2002 in New Castle to Ashley Altemus. He would have been a member of the senior class at Lincoln High School this upcoming school year. He worked as a pizza delivery boy for Scustie’s Pizza Shop in New Castle. A caring and helpful person, Darren enjoyed weight lifting and spending precious time with his family and many friends.

He was preceded in death by his paternal grandfather Scott Lauderbaugh, Sr.

Visitation will be held on Wednesday from 2-4 and 6-8 pm and on Thursday from 10:30 am until the time of the service at 11:30 am at the Samuel Teolis Funeral Home and Crematory Inc. with Rev. John Yergan officiating.

Memorial contributions in Darren’s (Scotty) name may be made to the Lawrence County Human Society.