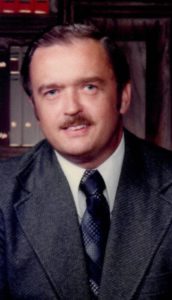 Mr. Brooks was born on May 19 1933 in Pittsburgh to the late Horatio and Connie (Donahue) Brooks. He had graduated from the Crafton High School with the class of 1951. Following high school, he enlisted with the U.S. Army on May 7, 1953 and served until his discharge on May 4, 1956. While in the Army, he was a member of the 2nd Army Band and the 101st Army Division Band as a tuba and cello player. He was awarded the National Defense Service Medal and the Good Conduct Medal. After his service with the army, David graduated from Duquesne University with a Degree in Music, the University of Pittsburgh where he earned his Superintendents Certification, and The University of Akron earning his Degree in Law. While in school, David worked for the Pennsylvania Railroad for eleven years as a Signal Tower Operator. He was hired by the Riverside School District as their first Band Director, and for ten years as the Riverside High School Principle, followed by three years as the Assistant Superintendent. He then had his own law firm (Brook’s Law) for twenty-two years. A talented musician, David played in the Wheeling Symphony Orchestra. He is a member of the Holy Redeemer parish, and the American Mensa Limited. He enjoyed reading and listening to classical music.

He is survived by his wife, Gloria (Leitner) Brooks whom he married on June 18, 1960, his son, Eric (Jonelle) Brooks of Clarksville, TN, his grandchildren, Quenton, Christian, and Erica Brooks, and his brother, John Brooks of Carrick, PA.

He was preceded in death by his parents, his son, David N. Brooks in 2003, his sisters, Connie, Ellen (Sister Joan of Arc), Evelyn, Sarah, and Joan, and his brother, Hugh Brooks.

Visitation will be held on Friday from 4-8 pm at the Samuel Teolis Funeral Home and Crematory, Inc.. A mass of Christian burial will be held on Saturday at 10:00 am at the Holy Redeemer Church with Father Mark Thomas officiating. Inurnment will be at the Holy Redeemer Cemetery. Members of the Veterans Honor Guard are asked to meet at the church on Saturday by 10:45 am to conduct full military honors.

Memorial contributions in Mr. Brooks name may be made to the Holy Redeemer Angel Fund.