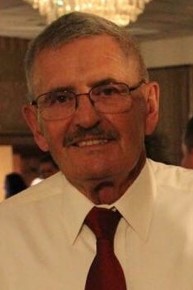 Mr. Smith was born on April 23, 1940 in Lackawanna, NY to the late Norman E. and Marjorie V. (Garasz) Smith. He had graduated from the Lackawanna High School with the class of 1958. Following high school, Dave served with the U.S. Navy from 1959 until his discharge in 1963 on the U.S.S. Intrepid. Dave then worked for Republic Steel in Buffalo, NY until moving to Ellwood City in 1978 at which time he was hired by Inmetco and worked there as a supervisor until his retirement. Dave is a member of the Holy Redeemer Parish, the Holy Name Society of the Holy Redeemer Parish, the Special Activities Group, and was a volunteer for many years for the parish’s Annual Bazaar. He was a member and past Governor of the MOOSE Lodge #93, the Elks Club, and the Saxons Club. Dave also enjoyed bowling, hunting, fishing, and working on cars.

Mr. Smith is survived by his wife, Sharon (Weaver) Smith whom he married on July 23, 1966, his daughters, Anna Marie Barton of Ellwood City and Joellen Smith and her companion Tom Bobic of Tennessee, his sons, David (Barb) Smith of Canonsburg and Kevin Smith and his fiancé Nikki Harbaugh of Big Sky, MT, and his grandchildren, Rebekah (Brian) Stiles, Chucky Smith, Evan Barton, Tarah Barton, Tyler Smith, and Jordyn Smith. He is also survived by his brother, Leon (Nancy) Smith of Marietta, GA.

He was preceded in death by his parents, his sister, Patricia Penner, his brother, Timothy Smith, and his daughter-in-law, Jane Rombach Smith.

Visitation will be held on Monday from 2-4 and 7-9 at the Samuel Teolis Funeral Home, Inc. and Cremation Services. Members of the Holy Name Society and the Special Activities Group are asked to meet at the funeral home on Monday by 7:50 pm to conduct a service at 8:00 pm.

Memorial contributions in Dave’s name may be made to the VNA Inpatient Hospice in Butler, or to the Holy Redeemer Angel Fund.