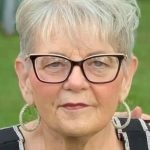 Debbie was born on January 2nd, 1952 in Ellwood City, to the late John “Jack” and Shirley (Hall) Britton. She had attended Riverside High School. A homemaker, Debbie was always known for her wonderful cooking and attention to family. She was a great mother, grandmother, aunt, sister, and friend. Debbie really enjoyed spending time in South Carolina with her twin sister and other family members who lived there. She will be deeply missed.

She was preceded in death by her parents, her husband Carl S. Agostinelli whom she married on July 29th, 1972 and passed away on December 1st, 2009, sister Sandy Avery, brother Dean Britton, and father-in-law Carl Agostinelli.

Visitation will be held on Wednesday, January 11th, 2023 from 4:00 pm until the time of memorial service at 6:30 pm at the Samuel Teolis Funeral Home and Crematory Inc., with Pastor Dennis Arndt officiating.

Memorial donations in Debbie’s name may be made out to: Ellwood City Wolves’ Club Scholarship Fund.