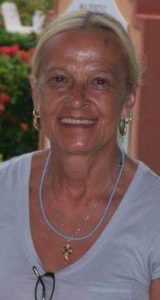 Deborah McDonald, 69, of Ambridge, Pa passed away on Wednesday, April 15, 2020 at the Concordia Good Samaritan Hospice in Cabot, Pa.

Deborah was born on January 31, 1952 in Ellwood City to the late Bernard L. and Frances M. (Vincik) Brown. She had graduated from the Lawrence County VO-Tech in 1969 where she studied business, and from Kent State University in 1973 with a degree in both business and marketing. Deborah worked as an assistant marketing director for Fast Lane Food Stores for 20 years, and later for Acosta Sales and Marketing.

She is survived by her daughters, Michelle Garrett of Jackson, MS and Barbara (Kasey) Best of Ellijay, GA, her son, Robert Delposen of Ambridge, her grandchildren, Chase Beil, Caleb Delposen, Laylah Delposen, and Kaley Best, and her great-grandson, Elijah Beil. She is also survived by her sisters, Dorothy (Michael) Burcik of Florida, Sylvia (Kenneth) Grimes of White Twp. and Kathy (Bill) Fazenbaker of Ellwood City, her brothers, Robert Brown of Virginia and Thomas Brown of Chippewa Twp., and her life partner, James Jahoda.

She was preceded in death by her parents, her husband, Robert Delposen, and her sister, Betty Izzo.

Due to the COVID-19 pandemic there will not be a public service. The funeral arrangements are entrusted to the Samuel Teolis Funeral Home and Crematory Inc..