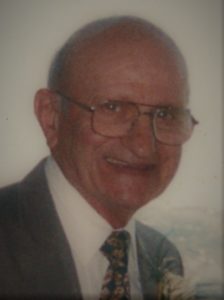 Mr. Bellissimo was born on February 12th, 1927 in Ellwood City to the late Bruno and Victoria (DeCaria) Bellissimo. He is a graduate of Lincoln High School. He enlisted with the U.S. Army in 1945 and served in the Medical Corp. until his honorable discharge in 1946. He was employed at the Babcock and Wilcox Steel Mill for 10 years, the U.S. Steel Mill for 30 years and was the Caretaker of Locust Grove Cemetery for over 50 years. At his retirement party in 2005 he received the American Legion Award for honoring and caring for the graves of the 883 veterans interred in the Locust Grove Cemetery and memorial activities that he participated in for the previous 55 years. Mimi is a member of the Holy Redeemer Parish and the Sons of Italy #608. He enjoyed spending time with his grandchildren, and great-grandchildren the most. He also enjoyed traveling with his wife, tending to his flower gardens, and wine making with his brothers.

The family would like to thank Rose Sabattini and Gina Medsgar for their wonderful hospice care.

Family and friends are invited to a mass of Christian burial which will be held on Monday at Noon at the Holy Redeemer Church with Father Mark Thomas officiating. Those attending that are not vaccinated are asked to please wear a mask. Interment will follow at the Locust Grove Cemetery where military honors will be conducted.

Memorial donations in  Mr. Bellissimo’s name may be made to the Holy Redeemer Ladies of Charity, and the Mother Teresa Hospice, 3950 Broadhead Rd., Monaca, Pa 15061.