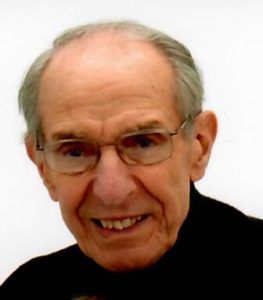 Passed away Tuesday, November 13, 2018, at Lutheran Senior Life VNA in Western Pennsylvania in Butler, surrounded by his wife of 71 years and his son David Scopellite.

Dominick was born October 26, 1923, in Reggio Calabria, Italy.  He came to America when he was 2 years old with his mother, he lived in Harrisburg, PA until they moved to Wampum where he settled in Ellwood City.  At age 16, he moved to Brooklyn, New York to live with his sister Jean and her husband Ralph Costagliola. He returned to Ellwood and graduated from Lincoln High School in 1942.

Dominick was a member of the Holy Redeemer Catholic Church.  He was a member of the Ellwood City Art Club and was a talented artist.  He was also an avid bowler, golfer, artist, and enjoyed playing the organ.  He greatly enjoyed the hobby of word working and spent many hours teaching the craft to his grandchildren.

Visitation we be held on Friday from 5-8 pm and on Saturday from 10:00 am until the time of the Blessing Service at 11:00 am at the Samuel Teolis Funeral Home, Inc. and Cremation Services with Father Mark Thomas officiating. Interment will be at the Locust Grove Cemetery.

Memorial contributions in Mr. Scopellite’s name may be made to the Lutheran Senior Life, 115 Technology Dr., Butler, Pa 16001, or to the donor’s charity of choice.