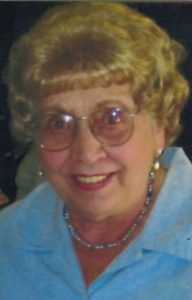 Mrs. DiFrischia was born on December 28, 1934 in Ellwood City to the late John and Matilda (Schuffert) Kramer. She had graduated from Lincoln High School with the class of 1953. On April 30, 1955 she married Donald T. DiFrischia.

She was preceded in death by her parents, her husband Donald on November 19, 2016, her grandson, John Donald DiFrischia in infancy, and her sister, Betty Robeck.

Visitation will be held on Thursday from 11:00 am until the time of the service at Noon at the Samuel Teolis Funeral Home and Crematory Inc.. Interment will follow at the Pleasant Hill Cemetery in Perry Twp..

Memorial contributions in Mrs. DiFrischia’s name may be made to the charity of the donors choice.