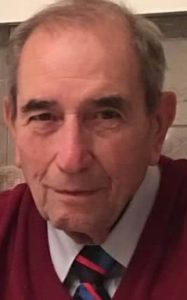 Dr. John J. DeCaro, Sr, 90, of Ellwood City, PA passed away on October 23, 2021 at the Jameson Care Center following a brief illness.  He was born on February 17, 1931 in Ellwood City, to the late Ernest and Theresa (Sandora) DeCaro. He married the former Theresa Rossi on August 10, 1957. He graduated from Lincoln High School in 1949. John attended Gannon College, where he was a member of the undefeated 1949 football team and graduated with a degree in Business Administration from Western Reserve University in 1953.  He was also a member of the football team at Western Reserve.  John received his Master’s degree in Educational Administration from Kent State University in 1960 and his Ph.D. in Educational Administration from the University of Pittsburgh in 1976.

John was active in the community having served on the Ellwood City Library Board of Trustees, Ellwood City Hospital Auxiliary Board, and the Boards of Directors for Lawrence County Social Services, Lawrence County Human Services and Lawrence County Association for Responsible Care, and Sons of Italy.  John was also a founding member of the Ellwood City Italian American Heritage Foundation.  He was an active member of the Holy Redeemer Parish, having served as a lector, CCD teacher, funeral altar server and as a member of the pastoral council.  John also was a member of the Parish’s Holy Name Society, Men’s Fellowship Group, Special Activities Group and Knights of Columbus.  He also coached the Purification of BVM Blue Angels football team.  John received many awards recognizing his service, including the Pittsburgh Diocesan Life Service Award and Beaver County Holy Name Society Blessed John of Vercelli Award.

John was an avid reader and enjoyed doing crossword puzzles. After retirement, he relished attending daily Mass and having coffee with his special friends of the Amen Association.

Visitation will be held on Wednesday, October 27th, from 6-8 pm, and on Thursday from 2-4 and 6-8 pm at the Samuel Teolis Funeral Home and Crematory Inc., 309 Spring Avenue, Ellwood City.  A mass of Christian burial will take place on Friday, October 29th, at the Holy Redeemer Church at 10:00 am with Father Mark Thomas Officiating.  Interment will follow at the Holy Redeemer Cemetery.

Memorial Contributions may be made to the Holy Redeemer Social Services and Ellwood City Education Foundation.