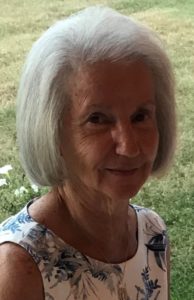 You knew Ellie.  If you ever took sheer joy in observing something beautiful in nature, such as a whitetail deer grazing in a field or feeling the warmth of the sun while sitting on the beach, you knew her.  You knew Ellie if you ever witnessed someone getting a momentous thrill from winning something as simple as the 50/50 raffle at a family reunion.  You knew Ellie if your most elevated happiness stemmed from watching your children or grandchildren succeed.  If you are able to fully appreciate the beauty and wonder of God’s Earth, then you knew Ellie.  As the Tinman was told by the Wizard of Oz, “A heart is not judged by how much it loves, but by how much it is loved by others.”  All who knew her can easily identify with this quote and its application to her life as a wife, mother, mother-in-law, grandmother, sister, daughter, aunt, neighbor, and friend.

Eleanor Ann Angelucci, 90, passed on to Heaven at 10:10 p.m. on April 4, 2022.  Born August 18, 1931 in Ellwood City, PA to the late Angelo S. Conforti and Maria Josephine Figliomeni Conforti, Ellie grew up in the West End neighborhood of Ellwood City with her parents (who were immigrants from Italy) and 12 brothers and sisters.  Ellie was proud to be an “Ellwoodian” and always considered Ellwood City to be home.  She liked to playfully debate with her husband, Fonce, as to which Ellwood City neighborhood was better: West End or North Side?   As a grade school student at Park Gate Elementary School, she was asked to serve as an interpreter for new parents and students who only spoke Italian.  Ellie could speak both English and Italian all of her life, frequently conversing in Italian with her sisters over the phone or in conversation.

She was a member of Holy Spirit Catholic Parish in New Castle, PA and was a longtime member of St. Joseph the Worker Church.  Volunteering through the years, she was active in many activities and guilds.  She never missed Sunday mass or Holy Day masses.  She insisted upon glorifying God at every turn in life.  Her devotion to the Blessed Mother was constant and consistent.  She and her husband of 68 years, Fonce, donated funds for the brick shrine that sits outside of St. Joseph the Worker Church after the couple had won a raffle on a $2 ticket shortly after the church opened.

Ellie started working outside her childhood home early in life in order to earn her own money and contribute some to her family.  At one time, while still only a teenager, she had 11 different jobs in the span of one year.  Once her children were older, she went back to work as an administrative assistant with Renee Shirey Beauty Salon, Linda Bevan’s Hair Designs, and Rayanne’s Beauty Salon in New Castle, PA.  Her primary job throughout her lifetime was that of a mother, however; a job in which she took great pride, devoting herself unequivocally.  “All I am or ever hope to be, I owe to my angel mother,” said Abraham Lincoln.  In the mold of her own “angel mother” who raised 13 children of her own, Ellie gave a complete effort in being a steadfast, model guardian to her five children.  Ellie’s heart, mind, and efforts were always with her family.  Nieces and nephews who would visit left her house feeling better than when they had arrived.  She always had a small gift, snack, or treat for the many individuals who came to call.  All were treated with love, care, and hospitality.  A devoted wife and mother, she put the needs of her children ahead of her own repeatedly, prompting a teacher from her children’s high school to once remark, “It’s all about you guys.  You kids.  That’s what they’re all about.”  Ellie was also a fan of Pittsburgh sports, especially the Pirates, listening to them on the radio, watching them on television, or going to games at Forbes Field, Three Rivers Stadium, or PNC Park.  She enjoyed keeping score while attending Pirate games.  She rarely missed games, concerts, dance revues, or other activities of her children and grandchildren. She liked knitting, crocheting, canning vegetables from the garden, baking, and hosting Sunday family dinners.  She also enjoyed fishing, bowling, playing cards, taking walks, and vacationing with her family.

Ellie was preceded in death by her parents; her husband, Alfonso F. Angelucci, who passed away on May 17, 2021; a son, Paul Matthew, who passed away three days after her husband on May 20, 2021; five sisters, Gloria Kalbfleisch, Beatrice Miller, Lucy Harden, Peggy Shea and Alba Reagan, and three brothers, Edward Conforti, Ralph Conforti, and Cosmo Conforti.

Visitation will be on Thursday, April 7th from4-8 pm at the Samuel Teolis Funeral Home and Crematory Inc., 309 Spring Avenue, Ellwood City, PA.  A mass of Christian burial will be held on Friday, April 8th at 10:00 am at the Holy Redeemer Church in Ellwood City with Father Mark Thomas officiating. Entombment  will follow at the Holy Redeemer Cemetery.  In lieu of flowers, the family is requesting that donations be made to the Shenango Area School District Education Foundation or Kindred Hospice.