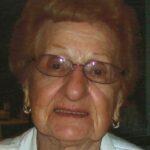 Liz was born on June 8th, 1922 in Ellwood City to the late Joseph and Marianna (Anzolliti) Pasta. She graduated from Lincoln High School in January, with the class of 1940. She worked at the Tube Mill, Miller’s Dry Goods and The Mattress Factory. Liz was a kind, giving person who loved her family and friends. She will be missed by those whose lives she touched. She was small in stature, but strong in her will, determination, and independence. Liz’s family is grateful that she was able to celebrate her 100th birthday with a family gathering at Vinny’s Restaurant. She proudly received a proclamation from Mayor Anthony Court. She was a member of the Holy Redeemer Church, Divine Grace Parish.

She was preceded in death by her parents, her husband, Anthony Pratt, whom she married on August 23rd, 1941 and passed away on July 16th, 1995, daughter, Toni Ann McDevitt, son-in-laws, Edward Rohrmann and Larry George, sister, Mary Justine, and her brothers, Alfred, James and Tony Pasta.

As per Liz’s request, a private visitation and service will be held for her family at the Samuel Teolis Funeral Home and Crematory Inc., with Father James Wehner officiating. Interment will be at the Locust Grove Cemetery.

In lieu of flowers, memorial contributions in Liz’s name may be made to the Ellwood City area public Library, or St. Jude’s at: 501 St. Jude Place, Memphis, TN 38105or at,  https://www.stjude.org/donate.