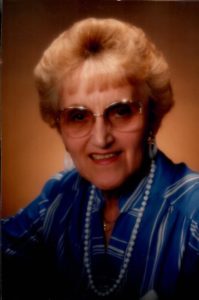 Mrs. Erna C Nussbaum passed away peacefully in her home on Monday August 27, 2018. She was 91 years old. She was a long-time resident of Ellwood City. She leaves behind two daughters, Karin M. Nussbaum and Lydia C. (Edward) Mansur. She was preceded in death by her husband, Hans J. Nussbaum. She was the daughter of Jakob and Cacelie Belka (born Moll).

Erna still has some family members living in Germany who shall miss her. She lived in a small community called Lagerdorf much like Ellwood City where everyone knew each other. She worked as a dental technician before she came to the United States.

She followed her husband to America from Germany in 1957. They moved to Ellwood City from Ohio in 1959. After a short time, they purchased their home, where they lived from 1960 until her death.

Erna was a member of St. Paul’s Lutheran Church, where she participated in many ways, from being on Council in various positions to helping to run the kitchen for special ceremonies and dinners. She loved her “little church” and was proud to be a member.

She was also a member of the Ladies Saxon Club, where she also participated in cooking dinners for special occasions. She enjoyed the companionship of these ladies and was proud to serve.

Erna’s special hobbies included gardening, both vegetable and flower, with many people commenting on her lovely front yard display of flowers. She also loved crocheting, sewing, cooking, playing cards and board games, taking long walks, swimming and line dancing. She was independent and would tackle any project that needed doing, sometimes with great results and sometimes with laughable ones, but she never stopped trying.

While her daughters were in Girl Scouts, she joined them as a leader. In this manner, she continued to spend quality time with them and teach them (as well as the other Girl Scouts) the life lessons that would help them throughout their lives.

She worked for many years as a school bus driver in the Ellwood City area as well at Romar Textiles in Ellwood City.

Erna touched many lives in her lifetime, and she will be missed.

Visitation will be at the Samuel Teolis’ Funeral Home Inc. and Cremation Services on Wednesday, August 29 from 4 to 6 pm. The funeral will be held at the funeral home on Thursday at 11 am with Robert Niggel officiating. Interment will be at the Locust Grove Cemetery. A “Celebration of Life” dinner will be held following the funeral at Vinny’s Restaurant. All are invited and encouraged to come.

Memorial contributions in Mrs. Nussbaum’s name may be made to the St. Paul’s Lutheran Church, or to the Multiple Sclerosis Society.