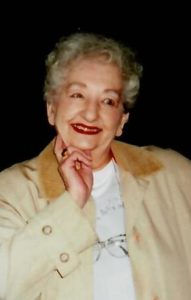 Esther{Kitty}Bell formerly of Ellwood City and Rhodes Estates in New Castle, went to be with her heavenly Lord, on Thursday, May 23, 2019 surrounded by family at Autumn Grove Manor in Harrisville, PA.

She was born in Ellwood City on March 5, 1925 to the late Dominick and Josephine Riccio Pisani. She was married to Edward Bell, who preceded her in death in January, 1984.

She is survived by a son, Robert Bell and a daughter and son-in-law, Janetta and Jeffrey Houk of Butler, her two grandchildren Jacqualyn Tedeski and Justin and Caitlin Houk and three great grandchildren, Charlotte Tedeski,Connor, and Camden Houk.

In her earlier years, she was a member of the Women’s Moose Auxiliary and was active in the Democratic Political Party.

She will be fondly remembered for her excellent cooking, crocheting and her love to play cards, singing and dancing.

Kitty was preceded in death by her brothers, Bruno, Dominick and Danny and her sisters Angie Viccari and Marian Frelin.

As per Esther’s wishes there will not be a public visitation or service. The funeral arrangements are entrusted to the Samuel Teolis Funeral Home and Crematory, Inc.

Donations in her memory can be made to the Ellwood City Library.