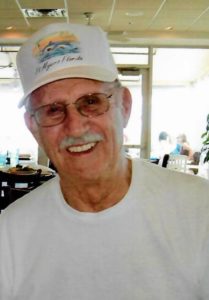 Mr. Eugene Angelucci, 87, of Ellwood City passed away on Wednesday, December 12, 2018 at the UPMC Presbyterian Hospital.

Mr. Angelucci was born on July 19, 1931 in Ellwood City to the late Dan and Mary A. (Ferrell) Angelucci, Sr.. He had graduated from Lincoln High School with the class of 1949, and is a member of the Holy Redeemer Parish. Eugene enlisted with the U.S. Army on November 25, 1952 and served with the 298th Engineering Company until his discharge on September 29, 1954 with the rank of Corporal. He was awarded the National Defense Service Medal, Korean Service Medal with 1 Bronze Service Star, United States Service Medal, Rok Presidential Unit Citation, and the Good Conduct Medal. Following his service with the Army, Eugene worked at Matthews Conveyor, the Babcock and Wilcox Steel Mill in Koppel and Beaver Falls, and Portersville Valve as a machine operator. In his younger years he enjoyed riding motorcycles and fishing. Eugene also liked making airplanes and motorcycle out of pop cans.

He is survived by his daughters, Luann (Robert) Nauman and Amy (Mark) Fotia both of Ellwood City, his grandchildren, Ryan (Amy) Nauman, Shayne Nauman, Mark Fotia II, and Nicholas Fotia, and his great grandchildren, Ava Nauman and Rosa Nauman. He is also survived by his sisters, Rose Pietrcollo, Mary Esther Shanon, and Arlene (James) Spievogel of Ellwood City, and his brothers,  Alfonso “Fonce” (Ellie) Angelucci and Dan (Dottie) Angeluicci, Jr. both of Shenango Twp., and his sister-in-law, Viola Angelucci of Ellwood City.

He was preceded in death by his parents, his wife, Hazel Louise (Irvine) Angelucci, and his brothers, Alfonso in infancy and Anthony Angelucci.

Visitation will be held on Sunday from 2-4 and 6-8 pm at the Samuel Teolis Funeral Home, Inc and Cremation Services. A mass of Christian burial will be held on Monday at 10:00 am at the Holy Redeemer Church with Father Mark Thomas officiating. Entombment will follow at the Holy Redeemer Cemetery Mausoleum. Members of the Veterans Honor Guard are asked to meet at the church on Monday by 10:45 am to conduct full military honors.