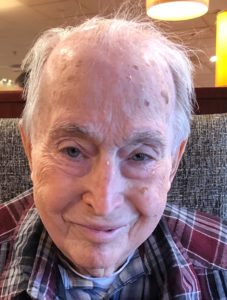 Mr. Eugene Leroy Stiefel, 94, passed away on Thursday, June 3rd, 2021. He was born on August 12th, 1926 in Ellwood City to the late Archie and Mildred (Jacobs) Stiefel and was a lifelong resident of Ellwood City. One of the few remaining World War II veterans, Eugene served on Guam as a Navy Seabee. He enlisted with the U.S. Navy on August 9th, 1944 and served as a Seaman First Class in the Guam Theatre and the Asiatic-Pacific Theatre until his honorable discharge on May 31st, 1946. He was proud of his military service and loved our country. Eugene was a life member of the American Legion Post #157 and the Loyal Order of the Moose Lodge #93. For 36 years, Eugene worked for Rockwell International Corporation in New Castle having retired in 1986.

A memorial service will be held at a future date. Funeral arrangements are being handled by Samuel Teolis Funeral Home and Crematory Inc.. Interment will be at Holy Redeemer Cemetery.