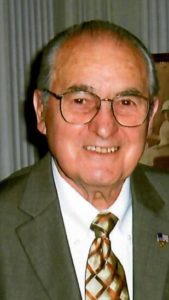 Mr. Evan Nardone, 93, of Koppel passed away on Sunday, December 9, 2018 at the Canterbury Place Family Hospice in Pittsburgh.

Mr. Nardone was born on January 4, 1925 in Bellaire, Ohio to the late Saverio Nardone and Theresa (DiPalma) Nardone Esoldo. He had graduated from Lincoln High School with the class of 1942. He enlisted with the U.S. Navy on March 30, 1943 and served as a Motor Machinist’s Mate, Second Class until his discharge on February 27, 1946. Following his service with the Navy, Evan graduated from the State Teachers College in Edinboro, Pa with a B.S. Degree in Education in 1950, Pennsylvania State University in 1951 having earned a Master of Education Degree, and the University of Pittsburgh where he earned a Secondary Principal’s Certificate in 1959. He worked as a teacher at the Towson High School in Maryland, Albion High School, and the Beaver Area High School where he taught History, Social Studies, and Civics. He then became the Assistant Principal for the Beaver Falls High School for 16 years, and then the Elementary Principal for the Beaver Falls School District until his retirement.

Mr. Nardone was actively involved with many civic and professional organizations in leadership roles such as the Elks, Lions, IMBS, Kiwanis Clubs, V.F.W., PSERS, and the Retired Principals Association. While teaching at the Beaver Area High School he was the assistant head football coach. He enjoyed cooking, baking, gardening, making wine, and singing. He was a prolific writer having written several children’s books. Mr. Nardone was a great educator and mentor to many young people.

He is survived by his daughters, Malina (Gary) Trozzo of Pittsburgh, Marian Jo (Tim) Brady of Pittsburgh, Anita (Ted) Dragan of Virginia, Annamarie (Tony) LaCava of Oakmont, Dr. Kathryn (Mike) Poggi of Seven Fields, and Kym Work of Connellsville, his son Joseph G. (Cindy) Nardone of Beaver, his 12 grandchildren, and 7 great-grandchildren. He is also survived by his sister, Alvida Guandolo of Chippewa Twp., his sisters-in-law, Darlene Esoldo and Shirley Nardone both of Koppel, and numerous nieces and nephews.

Visitation will be held on Thursday from 2-4 and 6-8 pm at the Samuel Teolis Funeral Home Inc. and Cremation Services. A mass of Christian burial will be held on Friday at 10:00 am at the Holy Redeemer Church with Father Mark Thomas officiating. Interment will follow at the St. Mary’s Cemetery in Beaver Falls. Members of the Veterans Honor Guard are asked to meet at the church on Friday by 10:45 am to conduct full military honors.

Memorial contributions in Mr. Nardone’s name may be made to the VA Pittsburgh Healthcare System, 118 V-A, 1010 Delafield Rd., Pittsburgh, Pa 15215.