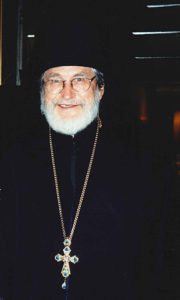 Father Pitirim (Peter) Stehnach, age 90, fell asleep in the Lord on the evening of July 10. Having served the Orthodox Church in America faithfully for over 50 years as a parish priest at St. Gregory, Wappingers Falls, NY; St. Andrew, Lyndora, PA; Holy Transfiguration, Steubenville, OH; Holy Resurrection, Forest Hills, PA; St. John the Baptist, Black Lick, PA, from where he retired on his 85th birthday. Father also served as a personal aide and driver for the late Archbishop Kyrill of Pittsburgh and Western Pennsylvania for over 20 years.

Born in Conemaugh, PA to the late Michael and Mary (Glova) Stehnach, Father was the sixth of nine children. He served seven years in the US Navy and Marines, after which he attended St. Vladimir’s Orthodox Seminary in New York City. He was ordained to the priesthood in 1963 and later took monastic vows. He was raised to the rank of Archimandrite on his 25th anniversary of priesthood.

He is survived by brothers Paul and Steven Stehnach and several nieces and nephews, as well as numerous spiritual children. He was greatly appreciated for his practical and loving spiritual guidance.

The funeral for a monastic will be  conducted at the Transfiguration Monastery Sunday evening, July 14, at 6:00 pm, preceded by viewing beginning at 4:00 pm. Divine Liturgy and burial will be held at the monastery Monday, July 15, beginning at 10:00 am. The funeral arrangements have been entrusted to the Samuel Teolis Funeral Home and Crematory Inc.