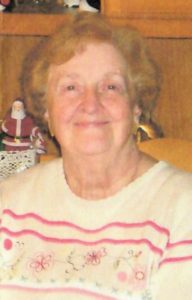 Mrs. Frances Jean Park, 93 of Ellwood City passed on 12/28/18 at Good Samaritan Hospice in Beaver due
to complications from a stroke.

She was the daughter of the late Frank Hartman and Mary Hartman Brewer, born 11/18/25 in Buffalo,
New York.

She was an amazing woman who loved her family unconditionally. She was fondly called GG for Great
Grandma.

As a young girl she worked for the FBI and then later in life retired from the Beaver County Library
System Headquarters.

She was raised in Reynoldsville, PA where she met her late husband, Albert M. Park, Sr. They were
blessed to share 42 years together. She was also preceded in death by her son, Albert M. Park, Jr. who
was the sparkle in her beautiful blue eyes.

Her family was her life and she always loved them to the fullest. She was an amazing mother and
friend to her children and grandchildren. On Christmas she would write stories for the grandchildren.
Each story had a special meaning about Christmas and her love for them.

She is survived by her daughters, Mrs. Dianne Guza and Mrs. (Raymond) Catherine Santillo.

She was preceded in death by her brothers, Mr. Jack Hartman and Mr. Clifford ( Bubby) Brewer, her
sisters Mrs. Eleanor Marshall and Mrs. Judy Meyers, and her son-in-law, Stanley Guza.

Memorial contributions may be made to St. Judes Children Hospital, Boys Town or your local libraries.