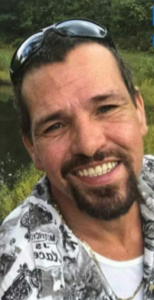 Frank A. Schaffer, 51, of New Galilee passed away on Wednesday, September 23, 2020 at the UPMC Presbyterian Hospital in Pittsburgh.

Frank was born on August 4, 1969 in Ellwood City to Frank A. Schaffer, Sr. and the late Fawnia (Eagan) Schaffer. He had attended Lincoln High School. Frank had worked for FCIS as a lineman and most recently was preparing to go and work with hurricane relief efforts in recent storm struck areas.  Frank was a Harley Davidson enthusiast, and enjoyed working on cars, fishing, and spending time with his grandchildren.

He was preceded in death by his mother, and his brother, Robert Schaffer.

Family and friends will be received on Monday from 1:00 pm until the time of the service at 3:00 pm at the Samuel Teolis Funeral Home and Crematory Inc. with Rev. Dennis Arndt officiating. Interment will be at the Lillyville Church of God Cemetery.