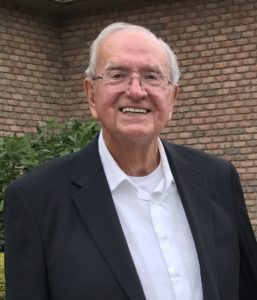 Mr. Frank E. Lucas passed away peacefully on Thursday, January 13, 2022  in North Canton, Ohio with his loving family by his side.  He was born in Ellwood City, Pa. on March 18, 1932 to Steve and Julia Lucas.He grew up in Ellwood City and graduated from Lincoln High school in 1950 and attendedGeneva College.  He Married the Love of his life ,the former Mary (Dolly) Barbati in 1952 . He served in the Army in Germany during the Korean war from 1952-1954 . He played on the Army team as a tight end and helped bring the team a championship title. Upon return to the states , he was employed by Eaton Corporation as a district manager rising to become  President of Lucas Hoist and Equipment Co. , established in  1970 with offices in Monroeville, Pa and Erie, Pa . In addition, he owned and operated Frank’s Tavern  and Pro-Mat Inc.   He was a member of Dale Carnegie Training Inc. as an instructor and earned both his insurance and stockbroker licenses throughout his career. He lived his life by the power of positive thinking which enabled him to experience some extraordinary things .  He was named as Company of the year in 1972  andBest Corporate Calendar of the year in 1973 by The Pittsburgh Press.    He was a loving husband, father, and grandfather. In his spare time, he attended every baseball game, dance recital, pageant and ice skating event for his grandchildren .  His family is left with an imprint that will remain for

generations.  He also enjoyed golf and boating. He is survived by his wife , Dolly, his Children;