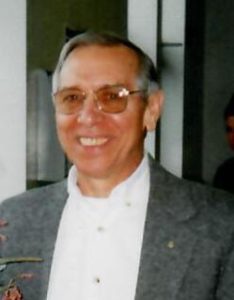 Mr. Schuster was born on October 23, 1940 in Ellwood City to the late John and Christine “Tillie” (Losch) Schuster. He had graduated from Lincoln High School with the class of 1959. He enlisted with the U.S. Air Force on March 20, 1961 and served with the 11th Organizational Maintenance Squadron until his discharge on December 17, 1965. as an aircraft mechanic. Fred worked at Matthews Conveyor for 8 years and  then at Inmetco for 22 years. He is a member of the Trinity Lutheran Church, and volunteered with the Meals On Wheels program for 12 years. He also was an active member of the Free and Accepted Masonic Lodge #599 in Ellwood City,  the AASR Valley of New Castle, and the American Legion.

Mr. Schuster is survived by his wife, Marie (Smith) Schuster, his son, Freddy Schuster of Ellwood City, his daughter, Debbie Kolesar of Hazel Green, AL, his grandchildren, Samantha and Chris Kolesar, his sister, Elizabeth Schuster and his brother, John “Sonny” Schuster both of Virginia.

Family and friends will be received on Tuesday from 1:00 pm until the time of the Memorial Service at 2:00 pm at the Trinity Lutheran Church with Pastor Peggy Suhr-Barkley officiating. Members of the Veterans Honor Guard are asked to meet at the church on Tuesday by 1:50 pm to conduct full military honors. The funeral arrangements are entrusted to the Samuel Teolis Funeral Home, Inc. and Cremation Services.