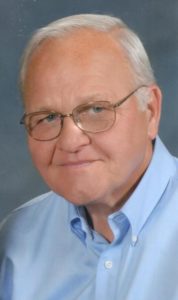 Mr. Veres was born on May 12, 1937 to the late Denes and Margaret Falcsik Veres. He is a member of the Lincoln High School class of 1956, and the Holy Redeemer Parish. George served with the U.S. Army, partially in Korea, from 1956 until his discharge in 1960 with the 1St Cavalry Division. He then had worked for the Ellwood City Ledger for 46 years as a printer having retired in 2005. George is also a member of the Hungarian Club, and a past member of the Holy Redeemer Special Activities Group and the MOOSE Lodge#93. He loved building models, reading, and working outside.

He is survived by his wife Sharlene Mitchell Veres whom he married on September 10, 1960, his son Michael (Stephanie) Veres of Brunswick, Ohio, his granddaughter Sofia Diana Veres, his brothers John (Wilma) Veres of Ellwood City, and Andrew (Gayle) Veres of Perrysburg, Ohio, his sisters-in-law Mary Veres of Ellport and Deborah (Matthew) Wimmel of Beaver Falls, his brother-in-law Gerald (Frances) Mitchell of New Wilmington, and several nieces and nephews.

George was preceded in death by his parents, his sister Priscilla Majors, his brothers Denes, Edward, and Eugene Veres, his mother and father-in-law Edward and Louise Mitchell, and his brother-in-law David Mitchell.

Visitation will be held on Thursday from 4-8 pm in the Samuel Teolis Funeral Home, Inc. and Cremation Services.

A mass of Christian Burial will be held on Friday at 10:00 am in the Holy Redeemer Church with Father Zachary Galiyas officiating. Entombment will follow at the Holy Redeemer Cemetery Assumption Mausoleum. Those attending the funeral mass are asked to meet at the funeral home on Friday by 9:20 am. Members of the Veterans Honor Guard are asked to meet at the cemetery on Friday by 10:50 am to conduct full military honors.