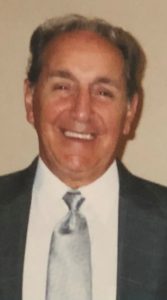 Mr. George Jacobs, 90, of Ellwood City passed away on Tuesday, February 18, 2020 at Concordia at Villa St. Joseph in Baden.

Mr. Jacobs was born on March 15, 1929 in New Castle to the late Amon and Martha (Shaheen) Jacobs. He graduated from New Castle High School with the class of 1947. On January 30, 1947 George enlisted with the United States Marine Corp. He served with the Second Tank Battalion, Second Marine Division, Fleet Marine Force as a tank crewman, later a tank commander. He was honorably discharged from the Marines on June 30, 1952 with the rank of Staff Sergeant.

He enjoyed coin collecting, boxing, physical fitness, and loved all animals. His main focus in life was his family.

He was preceded in death by his parents, his wife, Josephine (Flowers) Jacobs whom he married on March 6, 1951 and passed away on August 20, 2013, his sister, Ruby Toney, and his brothers, Thomas Jacobs, Mike Jacobs, Donny Jacobs.

Visitation will be held on Friday from 4-7 pm at the Samuel Teolis Funeral Home and Crematory Inc.. A mass of Christian burial will be held on Saturday at 10:00 am at the Holy Redeemer Church with Father Mark Thomas officiating. Interment will follow at the Locust Grove Cemetery. Members of the Veterans Honor Guard are asked to meet at the church on Saturday by 10:45 am to conduct full military honors.

Mr. Jacob’s family would like to thank Concordia at Villa St. Joseph’s staff for the wonderful care that they extended to him.

Memorial contributions in Mr. Jacobs’s name may be made to Concordia at Villa St. Joseph, or to the Human Society.