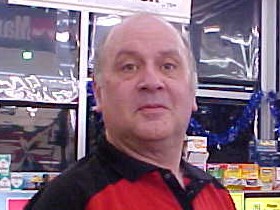 Gerald M. Foreman, 59, of Ellwood City passed away on Friday, February 9, 2018 at the UPMC Presbyterian Hospital, where he had been in the Trauma ICU after sustaining injuries in an accident on January 26. He was born on September 29, 1958 in Ellwood City to the late Gerald E. and Mary Lou Landolfi Foreman.

Jerry is a member of the Riverside High School class of 1976 and attended the Community College of Beaver County. He had worked at several convenience stores in the area. Most recently he was employed at Uni-Mart in Ellwood City. An avid bowler, he rolled numerous 300 games and 800 series. Jerry also won several local tournaments. His other interests included playing poker and following Pittsburgh area sports teams.

He is survived by his aunt Gladys Peffer of Ellwood City, along with many cousins and friends.

A memorial service will be held at the Christian Assembly Church, 315 8th St., Ellwood City at a later date, with Pastor Matthew Bupp officiating. The funeral arrangements are entrusted to the Samuel Teolis Funeral Home, Inc. and Cremation Services.

Jerry’s family and friends wish to thank the staff at the UPMC Presbyterian Hospital for the excellent care they provided.