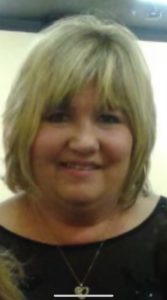 Geraldine H. Lutz, 57, of Perry Twp. passed away on Tuesday, November 23rd, 2021 at the UPMC Passavant Hospital in McCandless Twp..

Geraldine was born on January 17th, 1964 at the Landstuhl Military Base in Germany to the late Gerald H. and Hazel J. Aikman. She had graduated from Union High School with the class of 1982. She had worked at Loccisano’s Grocery Store in the hot foods department, and most recently for First Student as a school bus driver in the Riverside School District. She is a member of the Holy Redeemer Parish. Geraldine enjoyed shopping, going to Starbucks, and most importantly spending time with her family.

Visitation will be held on Friday from 4:00 pm until the time of the Blessing Service at 7:00 pm at the Samuel Teolis Funeral Home and Crematory Inc. with Father Mark Thomas officiating. The interment will be at the Slippery Rock Cemetery in Wayne Twp..

Memorial contributions in Geraldine’s name may be made to the Holy Redeemer Angel Fund.